Artist Statement
My exploration in metalwork and enameling illustrates a diverse array of entomological life. However, dissected, manipulated, or scrutinized, these organisms remain elusive and woefully unappreciated. Anthropomorphically biased, we focus only on the exasperations specific to the human condition—the blood thirsty mosquito, stinging wasp, or menacing cockroach lurking beneath the stove. So ready to smack, squish, and spray, we fail to appreciate the evolutionary aptitude and anatomical brilliance of these savage bugs. From intricate venation patterns within glassy wings to microscopically formidable tarsi, complex microcosms of line, form, and texture abound. Despite our cultural aversions, insects are the successful progeny of millions of years of evolution. They will continue to flourish or perish, irrespective to the blinds of human perception, long surpassing our own evolutionary blip. Perhaps the real aggravation then is not the pesky mosquito to the human, but the human as the ephemeral vexation in the eternal reign of the insects.

Biography
Charity Hall is an enamelist and metalsmith in Blacksburg, VA. Using metal, enamel, found objects and gemstones, she creates a diverse array of biologically inspired jewelry. As a former botanist, Hall is interested in the intricate relationships between art and science. She completed her MFA in Metal Design at East Carolina University in 2008 and taught Metalworking and Design at Pima Community College. In 2013, she moved to Blacksburg, VA and began a full time studio practice. The allure of science remains strong, influencing every piece she creates, and she still roams the forests and mountains, collecting specimens for natural history museums. Her work appears in American Craft Magazine, Behind the Brooch, Humor in Craft, New Rings: 500 Designs from Around the World, and 500 Enameled Objects, and she was a contributing author for Art Jewelry Magazine. Her work has been exhibited in a variety of juried and solo exhibitions. She teaches jewelry and enameling workshops at the Idyllwild Arts Academy, Penland School of Crafts, the Carpenter Enamel Art Foundation, and many other universities, craft schools, and guilds around the United States. She is a member of the Southern Highland Craft Guild. 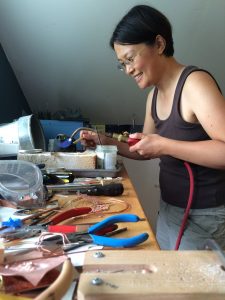 More information can be found at the Enamel Arts Foundation.